Towers of Hanoi and Sierpinskis Triangle

The Towers of Hanoi

The towers of hanoi puzzle has existed since 1883, For those unfamiliar with the puzzle it is a puzzle involving disks of increasing radius stacked on pegs. The aim of the game is to move the disks from the first peg to the last, obeying the following rules

There is a slight variant of the Towers of Hanoi puzzle that edits the 2nd rule. Now you may only move a disk from a peg to a directly adjacent peg, so moves between pegs 1 and 2, and between 2 and 3 are allowed, but no longer between 1 and 3.

The state space of the Hanoi Problem can be constructed from small self similar triangles, first create a vertex for each of the three possible positions of the largest disk, these vertices form a connected triangle.

Continue this process until you reach the smallest vertex, and then connect all states together that are reachable by moving one disk. Its clear to see what you’ve constructed is a Sierpinskis Triangle 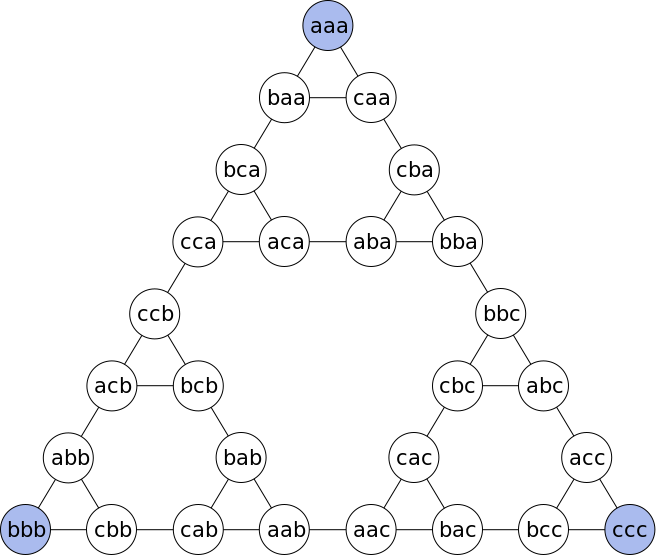 Now we know we have a method of traversing every state of the Hanoi problem, and we know that the state space can be represented by a Sierpinskis triangle.

Therefore we can write a method to solve the Towers of Hanoi with n disks, and adapt it to draw the nth iteration of Sierpinskis triangle.